Searching the internet reveals a great many surprises – one of the most surprising things is that the clear evidence against seaweed dredging as damaging to the environment and even to the health and well being of our seas.  Surprising because none of the major players seem to be aware of these documents freely available, but perhaps that is not an accident.

This is a feasibility study of farming seaweed off the coast of Scotland – it also mentions some of the surprising chemistry of our Laminaria hyperborea.

It seems the reason why seaweed is packed with iodine is because it is a weapon against attack – a poisonous bitter substance.  When the stalks are damaged it is released – so are some other very surprising chemicals.  This adds strength to the idea that our birds and sea mammals are suffering from a definitive lack of seaweed in the food chain or their diet.  So perhaps that is the cause of this worldwide die off.

Surprisingly enough it also mentions this 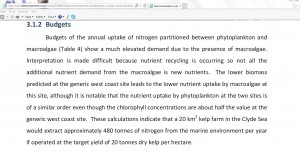 This is from the Crown estate document – it mentions 480 tons of nitrogen per 20 square kilometres of seabed removed by Laminaria hyperborea – so there is supposed to be 6,000 square kilometres of this on the Norwegian coast so that works out at roughly 144,000 tons of nitrogen removed from the sea per year – i assume that the figures for other chemicals would not be far from that.  The gulf stream brushes along the Norwegian coast – would that amount  not being removed mean that other coasts are  being enriched.  Could that be why they are  so many harmful algal blooms?

This paper seems to raise enormous amount of questions.

But one thing is becoming crystal clear – the Norwegian people are being fooled by the assurances and work of the bodies supposedly overseeing this and fmc biopolymers comes from a group of companies who are in receipt of record fines for environmental pollution, fraud, price fixing cartels and the production of one of the most damaging chemicals to wildlife and nature, in fact one of their chemicals responsible for the decimation of Africa’s wildlife and they are entrusted with the health of Norway’s seas.