It seems that most of the fish caught here inland have discolored livers – it seems reasonable to assume that my initial assumption that it was associated with decaying seaweed is incorrect – WRONG – it is more likely that this is associated with chemicals released by seaweed damaged by taretråling, a defense mechanism.

A cod caught a few days ago inside the Hustadvika bay exhibited a completely black liver – many specimens have discolored livers disintegrating – forming a kind of jelly.  If this is fatal to the fish I don’t know but it is reasonable to assume this is the case.

Internet searches into the analyses of the livers for iodine poisoning shows that this is a very difficult substance to detect but there is a machine that can do this.

So this is how it looks – our marine wildlife is being decimated by the defense mechanisms of disturbed seaweed.  The seaweed is being destroyed by trawlers dragging huge steel sleds over the seaweed beds to remove the seaweed for the production of alginates.

The marine ecosystem is supposedly being monitored by a government organization called the havsforsknings institut.

Here is a little report on one of their major players 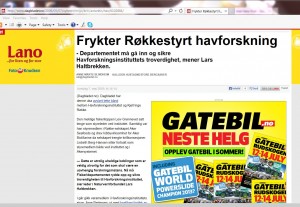 Here is the full article – essentially what is says is that Leiv Grønnevet sat on the board of the Havsfosknings institut – the one that overseas the health of the Norwegian coast – as the same time as being on the board of Aker seafoods and lobbied for them to get the krill fishing concession in the arctic.   The article goes on to mention several others.

The organization that overseas the health of the Norwegian seas is being run by people who also run some of the big seafood   industries – fmc biopolymer is in there too –  there are a number of other names easily connected – This is truly fascinating – if i can find this out so easily why cant others?

If anyone wants to contact me they can on stopptt@stopptt.no

This is truly outrageous and very dangerous – it is becoming obvious throughout the world that not taking care of nature is far more damaging to the economy than exploiting it.  That those who do exploit nature never have to pay personally for its destruction – it is the rest of us that do.  These people are protected by politicians – governments are tools – tools are best used by those who understand them – companies are experts in the use of those tools – they are however supposedly designed for everyone to use so all it takes is interest.  I AM – but my capabilities are limited.  However I am beginning to connect with others and other groups – we need coordination.