Probably the most important is vitamin b1 or thiamin.

We were alerted to the thiamin deficiency syndrome by a large environmental group we work with in Norway.

It appears that this chemical Thiaminase is produced by a number of land plants – and is found in the gut of very important sea food animals such as Herring and Sardines – what it does is it renders thiamine useless.

https://en.wikipedia.org/wiki/Thiaminase   Wikis article on the matter.

This is a report on keeping seabirds and mammals

http://lan.sagepub.com/content/35/suppl_1/57.full.pdf      A small extract on Thiamin and Thiaminase

Thiamine : Thiaminase, which breaks down the vitamin thiamine, is present in the t issues of some ®sh. Feeding birds on stored fish alone may therefore present a risk of thiamine deficiency. However, there is little evidence that this is a problem in practice in seabirds (although it can be fatal in sea mammals). The common practice of feeding seabirds thiamine supplements tucked into the opercula or gut of fish is also likely to be of little benefit, as thiaminase is present in high concentration in the gills and guts and will rapidly break down all the thiamine in the supplements
.

It seems that thiaminase is found in the gut of herring, and many other species of fish – it is difficult to find out the mechanisms for this, for instance where the substance comes from and why – it is also found on the surface of some sea urchins, produced by algae – perhaps a protection. 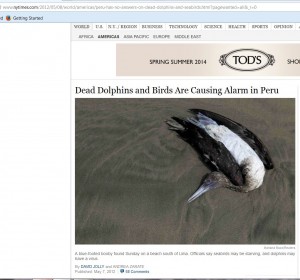 For the seabirds, he wrote, the “most plausible hypothesis so far” from the National Agricultural Health Service is that they are dying from a lack of food, mainly anchoveta (Engraulis ringens), a Peruvian anchovy, as a result of the sudden heating of coastal waters.

The Environment Ministry said the dolphin deaths had no link to fisheries, red tides or other biotoxins, bacteria, heavy metals or pesticides. It said it had also ruled out any connection to offshore seismic testing by companies to locate oil and gas deposits under the seabed.

The one thing the article does not mention is any connection with thiamin or thiaminase – pure speculation on my part?  There are a few indicators – Anchovies being a nearly exclusive food and thiaminase often being found in their guts and bodies – dolphins in another article appearing to be dying from too rapid ascent and descent causing the equivalent of the bends – a brain malfunction?? Thiamin deficiency can cause this –  How this is connected to seaweed destruction is unclear but it seems that nearly everything in our seas is connected in one way or another – there has been massive uncontrolled harvesting on those coasts, so much so that Chile banned it in 2008 though it still continues.