This is a section taken from the Scottish parliament debate on no take zones – the effect is clearly massive.

you completely ban fishing of all kinds in areas attractive to marine organisms – as a result production in those areas boom – the effects spread outwards and other areas nearby also begin to blossom.  Result everyone pleased.

However the key is NO FISHING – if you begin to analyse that it comes down to money – you have a big boat, you have a lot of bills.  If you cant pay them you loose your boat – however the activities of the boat have a serious effect on marine environments so naturally harvesting becomes more difficult eventually leading to a desert which benefits no one.   And all to pay the bills.

Consider a large trawler which does not put down its nets unless the catch has a value of more than £20,000 – that is not in any way or sense anything other than environmental vandalism, however the number of boats in this class is massive.

This is a snip from the full Scottish parliament report initially posted on facebook by https://www.facebook.com/ourseasscotland 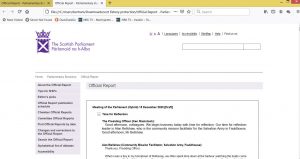