During our foray into the world of Seaweed trawling we’ve had a number of contacts with FMC – both personally through a chat with Ole Damm Kvilhaug who is responsible for FMCs operations here in Norway and second hand through actions my little group has undertaken.

Its almost like fencing – you work at your opponent hoping they will show a weakness.

For a while we concentrated on illegal trawling – we got one prosecution through but any more were heavily thwarted – so we tried overloaded ships – we filmed the trawlers overloaded and went to the Norwegian maritime authorities – yes they said, they do appear overloaded.  We were given to believe that there had been an immediate prosecution – the ships were suddenly much less loaded – but that only lasted a little while.

So we filmed the ships again – we were told by the Sjøfartsdirektoratet that they had a visit from FMC and that the quality of our videos were now too poor to pick out any details.  As i said fencing.

It brings to mind Monsanto cheerily causing devastation through court rulings against farmers and others – little realizing that it was kicking up a storm of massive proportions – one that is costing them dear.

With all this in mind there is a document produced by the eu on seaweed harvesting problems – essentially I think it says – if you want to start commercial seaweed harvesting and come across any environmental or local governmental problems we will have a team ready that can ease any problems.  This is the document –

Here are some snips

I have spoken to a number of colleagues about this and it seems to be a major ramping up of mechanical seaweed harvesting everywhere – roll on – the sooner the damage is visible the sooner it will be stopped. NEVER?

We sent Net Algae a question on their question form – 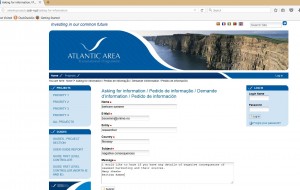 I hope to be able to post their answer soon.