Many seabird colonies on Norway’s coast are experiencing a massive downfall in population, some as much as 2/3rds – many of these colonies are in areas where seaweed trawling occurs.

The various ornithological organizations we have spoken to say this is due to the ecology being changed by a massive invasion of mackerel – it seems logical to assume that if the habitat for most of the food for the birds is removed, so will the “food ” go elsewhere.  In fact the habitat does not even have to be removed for there to be a change in the ecology of the seaweed beds – the plants have a chemical defense against predation – the destruction of some of the plants by dredges would be enough to trigger this.

There is currently a great deal of interest in this matter in Bergens Fylkestingret with questions being asked about who gave permission for trawling in the bird reserves?

Here we can confirm that there is trawling in 97 bird reserves – 35 are open for trawling all the time and the others are supposedly closed during the hatching season.

259148-kongelig_resolusjon_om_taretraling this is the document concerned

and here are some snips:

This is the front page with the bird colonies listed:

This mentions the 97 bird reserves: 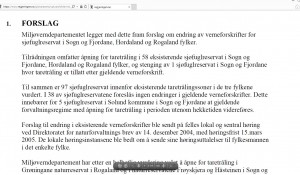 13. June, 2016 0
Previous Post What Other Countries Think of Seaweed Trawling
Next Post Fish Farming – A Ruthless Exploitation of Norway’s Coast