It has just released a document detailing its concerns over taretråling – essentially it says that as the seaweed forests on their coasts have the highest density of life on the planet they are deeply concerned that there has been no documentation on the consequences of taretråling on their coast.

It goes further, they want a report on the consequences before further permission is allowed.  So in other words 7 counties are deeply concerned on the effects and want this industry to stop. 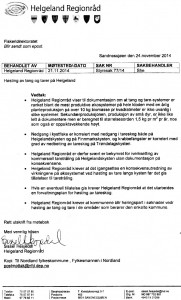 so why is it only these 7 – Taretråling has been going on in other parts of Norway for many years  why aren’t the other counties doing the same?

Possibly the answer is not the damage done to the environment but pure economics.

Worse still, the other counties are prepared to sell our environment to an American-owned company without any regard at all for the consequences.  We have papers detailing loss of important food species – crabs – lobsters and many types of fish – other documents tell of some not commercially important species having their populations devastated.  We know it seriously affects many bird species – we again have papers on this
.

The worst aspect of this is that we rely on science – we trust it, even when our common sense tells us different – perhaps to be more exact we rely on scientists – the scientists concerned with this do not have enough research to show that taretråling is safe – they do not know the consequences of removing such vast masses of plant material or destroying such massive amounts of wildlife.

It is becoming apparent however that those consequences are beginning to show – it wont be long before our politicians will begin to want answers.