This lecture was Presented by Nils T
. Hagen

What i found most interesting was the mechanism of the natural control of sea urchins, it appears there there are several, and that they are functioning. The main mechanism is by a nematode worm. We tried to find out information about this from Theirry Chopin in Canada (who is one of the worlds experts on seaweed http://www2.unb.ca/chopinlab/lab/present/thierrychopin.html  ) 2 years ago, but got nowhere – we still have a lot of unanswered questions about the mechanisms involved, it is clear they wont be answered in the present climate. One rather worrying feature of this problem is the experimental use of quicklime to control the predation – worrying because it might negatively effect the predacious (parasitic) nematode population – we understand there is also a predacious gastropod and that might be effected  – but then this is not our job, we have professionals for that.

There were no clear answers  –  did manage to find out that it has not happened because of taretråling (in some areas) and that nobody knows quite why however as the area (trondheim to lofoten) has only just recovered it seems dangerous to allow taretråling in the area.  There are reports which state that there is often a population explosion shortly after taretråling. http://uin.no/Ansattsider/nth.aspx

This lecture was Presented by Nils T. Hagen

Much of the information presented at the meeting  was about the opening of harvesting north of Trondheim – this is a contentious issue as this large area has been the subject of a plague of Sea urchins for many years, in fact the devastation was so much that there was simply not enough seaweed to warrant harvesting until recently.

From a private discussion with a representative of the miljødirektoratet https://www.miljodirektoratet.no/ they had presented no objections to opening this area for harvest as they have no negative information.  During our conversation it was clear that they had no information about my documents ( downloaded from the internet)  and  their contents in fact they were surprised, VERY.

What impact it would have had on their decision though is something else.   They were given a number of printouts.

Several times during the meeting i pointed out that this meeting was about tarehøsting in Norway – NOWHERE ELSE – there seemed to be no awareness at all of what is happening elsewhere  or even that our oceans are connected– of the negative consequences of harvesting in other lands – even little of the negative consequences of seaweed cultivating – there is an annual slick now  some 30,000 square kilometres in area in the yellow sea  due to a problem associated with cultivation.   http://ir.yic.ac.cn/bitstream/133337/3513/1/World’s%20largest%20macroalgal%20bloom%20caused%20by%20expansion%20of%20seaweed%20aquaculture%20in%20China.pdf

Why is it important that Norway should think about the bigger picture?  Norway has the largest amount of Laminaria Hyperborea apparently in the world – as I mentioned at the meeting it removes approximately 480 tons of nitrogen per 20 square kilometres (our marine biologists kept on pointing  out that there is over 50 million tons on the Norwegian coast – nearly 6,000 square kilometres – however no one at the meeting, in spite of frequent requests from many present – could tell us how they arrived at this figure)– harvesting it, disturbing it over such a wide area is going to have an effect – particularly as the gulf stream runs alongside the coast.  (how do I know this?? http://www.thecrownestate.co.uk/media/358662/initial_environmental_consideration_of_large-scale_seaweed_farming.pdf Sure you have to read quite a bit to find it, but its there alright)   That means that well over 100,000 tons of nitrogen are removed annually from the sea by just our seaweed – worldwide seaweed binds over 30 million tons of co2 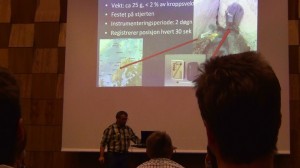 – apparently it is considerable and it also effects the eggs there not being enough food – I have written to Mr. Lorentsen concerning the Thiamine issue and sent links to the main document, but received no reply https://www.pnas.org/content/106/29/12001.full  Why Ornithologists are not very concerned about this report I don’t know – feedback from Lennert Balk (main author of the Thiamine report)indicates this.