Here is a rather long and complicated paper from Imr on Carbon capture and food production in the fjords of Norway.

There is a great deal here that speaks loudly against the destructive harvesting of our seaweed beds, however the most definitive is this snip – essentially it says that an estimated 150 million tons more co2 would be bound up in our ecology if the seaweed forests in the north of our Norway had not been destroyed by sea urchin predation – the 150 million tons would be over a period of 40 years . 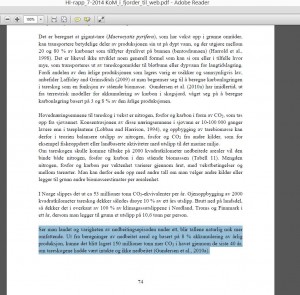 This initially is not a attack on the seaweed harvesting industry but a careful look back in time tells a slightly different story.

Verbal history from my colleague in Stopptt tells me that he has plenty of people from as far north as the Lofoten islands who tell him that in the early 1980s seaweed dredging was a major activity all the way up the coast.
We have papers clearly revealing that the removal of seaweed – by trawling or other mechanical means leads to the opening up of those areas for population explosions of sea urchins.

So in other words it is entirely possible that the plague of sea urchins costing our fisheries so dear has been brought about by Taretråling – further still if this paper is right then it has led to a significant increase in carbon in the atmosphere.

To cap that there has been recent “test trawling” above Trondheim and islands out to sea with the removal of a declared 30,000 tons of seaweed – this of course would mean a destruction of approximately 5 times that amount because that is the official figure for waste.