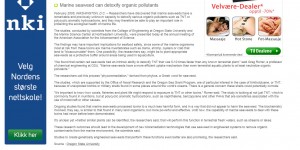 When we posed this question at Runde we were told that seaweed removes little pollution from the sea – documents we trust tell us otherwise.

Our dialogue with marine biologists have not reinforced our trust particularly as we are told(privately) that many reports are censored and that those that speak out loose their jobs.   It is nearly impossible for a qualified marine biologist to find work if he or she has upset anyone in either the industry or the state.

It was interesting to hear a very senior official from the fiskeriedirektoratet tell the meeting at Trondheim that taretrawlers have the same rights as any other fishing boats and that the old law of first right applies to them as to any fisherman – he was quoting from a 1995 law – we had a copy of the 2011 update which denies that.

This article from the BBC paints a intriguing picture of how the state and industry can become so entwined that the work of either is hampered, it is called regulatory capture.

The regulators are promised work in the industry they are supposed to regulate, as a result regulation comes second.  In the case of Fukushima the cost will be the highest for any disaster ever.

It is possible that every person on this planet may be paying for that soon. 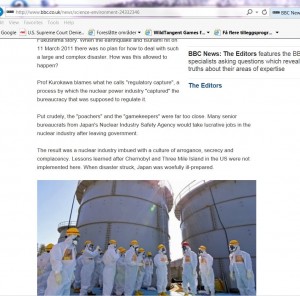 There are some distressingly similar characteristics here.  For instance the rawstoffchef in FMC biopolymer O:D: Kvilhaug worked for the fiskeriedirektoratet as a case handler for 12 years, there are many other instances.

We contacted Lennert Balk the lead scientist in this work and he agreed that this was a strong possibility.

Some countries such as Chile and Peru have had a very aggressive seaweed harvesting industry.  We have evidence to suggest that the seaweed beds in Brazil suffered collapse from overharvesting –  though we have only vague reports.

It was noted that in January 2012 there was a very large die off of marine mammals and birds along that coast.  Reasons given varied from mobilovirus to pollution, but finally the state declared it was starvation

Lennert Balks article  states that many observers are unable to distinguish between starvation and the effects of the Thiamine deficiency syndrome.  There have been large die-offs of birds along the Norwegian coast put down to the presence of large numbers of mackerel removing food normally taken by the birds however attempts at finding out if there has been any research done on this matter have led nowhere with no response at all from ornithological groups or individual scientists.

Recent articles and papers talk about ecological disaster concerning our seas –  the enrichment is approaching catastrophic proportions – the channel coasts of France and the uk are annually covered by huge drifts of Ulva species of seaweed. (this is the same in many parts of the world)

This type of plant takes over after ordinary seaweeds have been removed.

Decomposing seaweed on the Brittany coast have led to the deaths of many mammals – horses, wild boars and even the death of at least one man – the cost of the annual clean up is over 160 million euros and is born by the French Government.

– officially it is due to effluent from pig farms but no one can say that the annual French seaweed harvest is not having an effect.

Even Seaweed cultivating can have an effect – in Shingdao china there is an annual slick of this type of seaweed – 2013 the slick covered over 30,000 square kilometers.

The effects of our seas becoming enriched are well documented – a major effect is the increase of harmful algal blooms.  These are population explosions of microscopic algae which as a by product of their metabolism produce toxins such as domoic acid which are nerve agents. Normally these would effect shellfish and make those eating them very sick, however in the USA these toxins are reportedly becoming airborne effecting all on or near the sea. 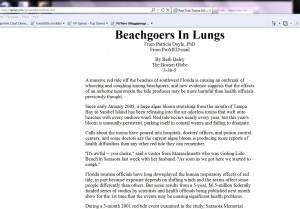 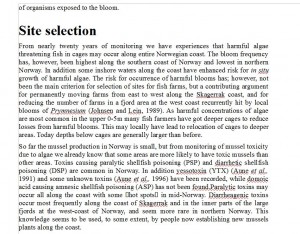 In the USA harmful algal blooms have been increasing massively – but the sickness that occurs from this is not as major an issue as the occurrence on the coast of Peru and Chile in the 70s where over 500 people died from a cholera epidemic – this is caused by contamination of drinking water however in this case it was carried in the sea by an unusual enrichment of algae – the bacteria attached themselves to the drifting plants and were carried from place to place along the coast – this document from the lancet publication details the events – the article goes further to mention marine enrichment.

We are told repeatedly by fmc biopolymers that there is no documented proof that taretråling does any harm.  Repeat anything enough and you will come to believe it –

However in view of the reports and scientific documents and the health of the Norwegian coast it is foolhardy to allow this to continue without further research.  One vital element of which should be careful analysis of what has happened in

other countries(by independent researchers) concerning this industry and why so much of the world currently only grows seaweed  and doesn’t harvest it from the wild as it has done in the past!!

10. November, 2013 0
Previous Post Overview – Disturbing
Next Post Letter to the Council/Kommune Explaining Why Taretråling Should Be Stopped