Probably the biggest hazard facing the marine ecosystem in Norway, if not the world is seaweed harvesting – as we know seaweed removes many dangerous chemicals, including carbon dioxide and it is an oxygenator – it is also the home for an amazing number of creatures including many of our most important food animals – from the map in the previous post it is clear that the entire Norwegian coast is being harvested.  The information on this is in the hands of qualified marine biologists.

From the video on the Henning Steen lecture at Runde.

Essentially part of the document said that taretråling does have an impact on Sea urchin numbers – and here is the proof to show it.

So we did a little research into Mr. Steen – and this is what we found. 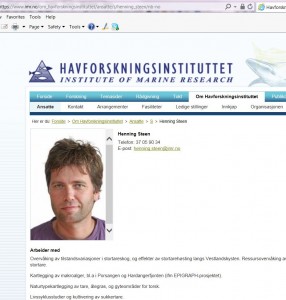 It appears he is responsible for the development of Taretråling on the Norwegian coast – and monitoring and establishing new areas to harvest.

Strangely enough we also found out that many of the directors of Fmc biopolymer come from the fiskeriedirektoratet and the havsforskning institut – so let’s be clear on this – there are very close ties between the industry and the regulatory bodies – very.

6. May, 2013 0
Previous Post Chile in Trouble
Next Post Strict Control of Seaweed Harvesting along the Norwegian Coast