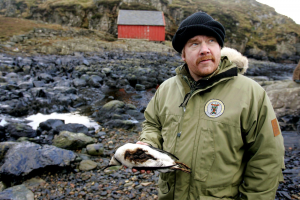 One of the basic tenets in our society is trust.

We have a state supported by us – working to uphold our best interests, many of us work for big companies that often interreact with nature and thus our future – we trust that they are trustworthy enough to honor the effort and support we put in – after all it is in their interests as well as ours.

Around the 1900s in the USA a company  called Undark employed mostly women painting the dials of watches with luminous paint – the company managers had special desks installed in their offices – these desks were lined with lead.

The girls hand painted the numerals – they were from all walks of life but mostly working class. They used fine paint brushes and were encouraged to lick the brushes to form a point.

After a little while the girls began getting ill, their teeth fell out, their bones began to decay – the paint they used was radium – the bosses knew, the girls died terrible deaths – the bosses got off scott free to run other businesses and lead “prosperous” lives.

How different is it now?

IN the 1920s a chemical called polytetrafleuroethiline was developed – for short ptfe – a major producer was du pont. This chemical showed remarkable properties, non stick properties, so it was tried on cookware – du pont decided to call it Teflon.

Over the years this product has remained a market leader, in fact here in Norway it is very difficult to buy any cookware not coated with Teflon.

Unfortunately the product is too good to be true – the fact is this material is horribly flawed and is still on sale only because of the power of this company and its supporters.

When it reaches a critical temperature it produces a gas called perfleuroisobutene – this is actually in section 2 of the chemical weapons register – the temperature is easily reached on an ordinary stove. It does not kill because there is one enough on a frying pan, but there is more than enough to kill any pet birds in the area. This is well known – the Du pont website even mentions teflon flu but plays it down so that people are not alarmed. 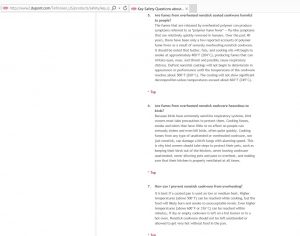 There is another chemical found in Teflon – this is used by Du pont to hide the true nature of the product – this is called perfluooctanoic acid (pfoa) this is the one that gathers most publicity and can be dealt with by the company when in confrontation.  http://bertie.no/?p=341 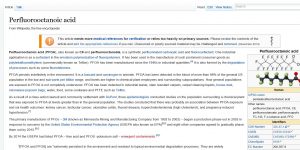 Stopptt is kept well informed by individuals both here in Norway and other countries – yes there is a serious resistance to the powerful organizations so heavily involved with our lives – this resistance is not something taken lightly – there is a process – reading articles – talking with others finding out the truths these companies are so eager to hide. Then spreading the word.

Unfortunately these companies understand that we are reliant on the system and that starts with the freedom of the press – so the press is often under serious pressure not to take these cases up.

This says the Norwegian press often censors articles which are connected with foreign business interests. Certainly applies to seaweed trawling.

Fmc the company that does the seaweed trawling on the Norwegian coast has been using the press to promote its product in the last few years, regular articles on how healthy seaweed is, how good it is for us 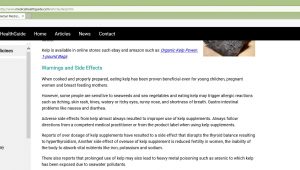 Have you ever noticed how many of these products are pushed at us every day – here is one which is actually rather funny because the name Soylent came from a book, later a film where a kind of protein brick was given to the starving population.  It was supposed to be made of plankton but our hero discovered that the seas were dead, nothing lived there – the Bricks were made of protein all right, human protein.

This says how wonderful the American superfood is: 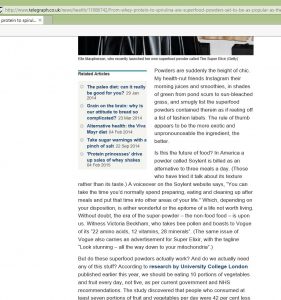 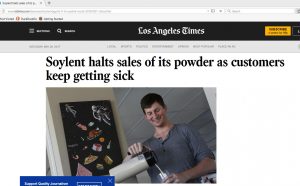 – The publicity behind seaweed has been intense, now we can report why ——-

FMC is for sale and has been bought here in Norway by Du Pont – https://seekingalpha.com/article/4059637-fmc-corporation-business-swap-dupont-increases-takeover-odds

This is where Undark – the radium Girls come in – the big companies are still doing it – we have been fooled by smoking for many years, we still are, or rather a lot of us are – what else are we being fooled about???

It is time for this to stop.

Looking at those “cool people”, smoking outside one should realize that they know the consequences – but they are not protected by the state, the state is not strong enough even though the cost of the sicknesses caused by this product is born by the state and everybody else. Recently a friend spent some time at a lung hospital here in Norway he told me that all the patients there were sick from smoking and that they went outside with their drips on trolleys to smoke.

But how can we stop this? We are only individuals and cannot make anyone do anything.

We start with ourselves – now you know about Teflon – you throw away your Teflon pans – you tell your friends, you talk with politicians tell them how you feel.– you look around and if there is anything you don’t like, you investigate – there is a growing awareness in our society – people are slowly becoming involved – not in the way the state wants but in our own way – for ourselves for our children – the state works for us – not Du pont or any other corporation but every so often it needs reminding of this.

One last little thing – here on the Norwegian coast a great many people have protested about Taretråling (seaweed trawling) they see the effects. To our knowledge at least 7 councils have complained to the state – the replies from the state contain a chilling response – “We own the rights to the seaweed forests, we can do as we please” This begs the question WHO DOES THE NORWEGIAN STATE WORK FOR?

28. May, 2017 0
Previous Post Many Others Are Deeply Concerned…
Next Post Effects of Seaweed Harvesting on Fish and Crustaceans. Fisken og havet no 4/2013