Taretråling, or seaweed trawling, occurs on the coast of Norway where seaweed grows in sufficient amounts to allow this.

This is a screen save from the fiskeriedirektoratets home page showing the areas marked for seaweed trawling. Unless my information is incorrect that covers the entire area where stor tare or Laminaria hyperborea grows on the coast of Norway in sufficient amounts to be harvestable. Closer examination of the maps on the website reveals that some areas within those boundaries are exempt from taretråling, but pressure from FMC biopolymers has allowed access to over 90 bird reserves etc. (information available on this site)

This document – produced by a Scottish government organization https://www.nature.scot/  details very nicely the situation on the Norwegian coast 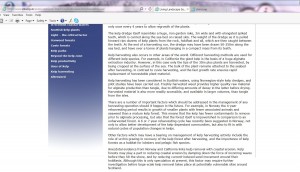 What it says is that they have considered the Norwegian method of harvesting. The frequency of the harvests means that most of the animals that normally live in the forests and are attached to the stalks are not present enabling a purer and more financially rewarding extraction of alginates.

Extract from this document —————

“here are a number of important factors which should be addressed in the management of any harvesting operation should it happen in the future. For example, in Norway the 4-year reharvesting period results in growth of smaller plants with fewer associated animals and seaweed than a mature kelp forest.”  —————–

So lets be a little clearer – the harvesting activity on the Norwegian coast is emptying the seaweed forests of life. Here it is in black and white from an impeccable source – the maps show where the harvesting occurs – currently the ships are harvesting further north than those boundaries because regrowth in areas formerly considered too poor has occurred.

Having been told by Henning Steen http://www.imr.no/om_havforskningsinstituttet/ansatte/s/henning_steen/nb-no

at the last taretråling conference at Runde during the question time on his presentation on Sea urchin predation on the Norwegian coast that this activity “has nothing to do with taretråling,” (not once but twice) I’m beginning to wonder about major Norwegian institutions and their role in looking after and monitoring the environment on behalf of the Norwegian people.

“other factors which may have a bearing on management of kelp harvesting activity include the role of urchin grazing in recovery of the kelp forest after harvesting, and the importance of kelp forests as a habitat for lobsters and pelagic fish species. “this again from the above document.

So this is pure speculation as i am no Marine biologist or even possessing the capabilities of doing this research – the area of seaweed trawling on the Norwegian coast is such that the areas being trawled are emptying of life – the surrounding areas are also being affected because of the release of defense chemicals from the plants in sympathy with the ones being “attacked” if this is true then that could link to why our seabirds are dying from lack of thyamine if the major source for this is the seaweed forests – and it is very probably occurring worldwide.

There you have it – an American company from a corporation with a long history of every kind of environmental devastation and destruction is destroying the habitat of and killing Norwegian wildlife on a grand scale.