A great deal of the confusion behind science is due to  long words and complicated verbal structures.

This is confusion is often used by  industries to cover the activities they don’t want the public or politicians to know about.

It is quite clear that this organization understands the  impact this industry is having on our ecologies.

This is from the document on their website giving an overview of the commercial harvesting activities in the many EU lands.

One of the first things is says is this

Essentially – it is that seaweed is a  keystone species on which a great deal of nature and wildlife depend, and that some countries are concerned enough to protect their marine forests.

Further – it says in the next paragraph how concerned marine biologists are with the damage the seaweed harvesting industry is inflicting on the environment – this is a little disturbing in itself as it plays down the damage caused – especially as it is clearly documented in many papers, they should be very aware of these major papers. 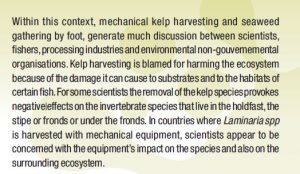 Here is a document entitled projects, produced by Net Algae –  it says it thinks seaweed harvesting in all its forms is a very undervalued business and will help any company or organization wanting to pursue commercial harvesting.

Yes it says first of all that it wants to bring together environmentalists and policymakers (businesses) , but the big question is why bother, if their stated aim is to harvest under any circumstances as they well know the environmental consequences.  Perhaps they hope to impress the environmentalists of the importance of modern economics?

Here is the front page of the document concerned 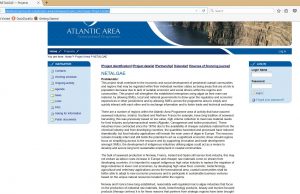 It uses incredibly obtuse and dense language – as such it can be interpreted in several ways – however we think we have the gist of it.

Frankly when you consider the budget of over 1 million euros to encourage the scraping and destruction of marine habitats over a massive area the eu seems to be breaking its own laws on natural resources.

we wrote to them asking if they knew of any negative consequences of seaweed harvesting, they did not reply –

Even state documents from the UK, Ireland and Scotland on the feasibility of seaweed harvesting – that is documents promoting the industry, say that commercial mechanical  harvesting is not sustainable – the Irish paper is signed by 45 international marine biologists and other scientists

Here is a little snip   – it talks about biased reports and the sea bed becoming a desert from repeated mechanical harvesting of the type currently employed on the Norwegian coast. 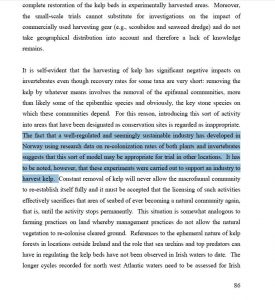 Ref Biased Norwegian reports – there is only one reference we can find on the internet which indicates that the damage to the sea floor and marine habitat is minimal and that is on the website of FMC biopolymer, now DU PONT – it is interesting to note that it is unsigned – that is no marine biologist has verified the statements.  The site contains one link to an article which is signed but does not in any way say that harvesting is sustainable or eco friendly in fact it says the reverse.

and the “signed link”  http://www.imr.no/temasider/alger/tang_og_tare/nb-no

It is possible that the EU is Breaking its own laws in promoting this industry, it has ignored all indications that it is destroying the ecosystem even though they are clearly indicated in many official state papers.

It is interesting to note that the document Netalgae-Problematic is currently unavailable – perhaps they are sensitive to criticism.