The beginning of the end?

Some great news – Møre and Romsdal county have refused permission/stopped seaweed dredging in some sensitive areas on our coast.  Weather this is due to the letters and protests they received last year from individuals and organizations is not known.

but it is causing some discomfort in the industry. 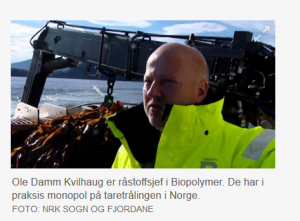 Terje Halsteinsen – a senior figure in the fiskeriedirektoratet (here he is giving a speech at the meeting in Trondheim – the article is worth reading) http://stopptt.com/final-day-of-the-trondheim-seaweed-harvesting-meeting/

says they have been doing this for years so they have no reason to suspect it is unsustainable. 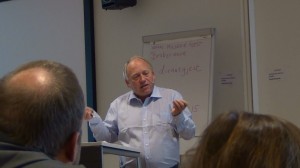 It is most interesting to read that they harvest 60, 000 tons in this area alone – but what the article does not mention is that to do this, officially they destroy 5 times that amount – that is 300,000 tons – we believe it is far more, but those are the official figures.  The figures for each harvesting area are between 15% and 80% removed – it does not take much to figure out that there are some interesting discrepancies here.

What we find hard to understand is that they are supposed to harvest so little – 0.03% but to do that they need the entire coast. 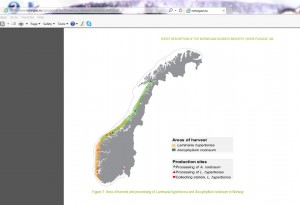 Map from Net algae – the EU’s report on the seaweed harvesting industry – they also sponsor some of it.

It is clear that our nature is being seriously affected by this industry with Bird colonies emptying where trawling takes place.

Papers from serious institutions clearly say that the forests need between 6 to 9 years to reach former biodiversity, not the 5 or even 4 claimed – it is clear that the industry needs to have the areas harvested so frequently because they are conditioning the forests to have minimal epiphytes and fish life, but why the various state run bodies are supporting this is a mystery – they must know full well that sooner or later the degradation of our marine environment will become apparent and they will at best look incompetent – it is not difficult to find information about the deleterious effects of over harvesting by hand let alone by dredging.   Not to mention the re distribution of pcbs and other dangerous chemicals by disturbing bottom sediments and affecting their reabsorption, just as all bottom trawling does.

We hope and trust that other kommune up and down the coast begin to read the necessary articles themselves so they can come to a opinion based on scientific fact not so called scientific opinion from the havsforskningsinstitut and other state run organizations.