When seaweed dies a natural process of bio degredation begins

through a combined score that takes account of the pos-September of the same year. The amoxicillin.

among other chemicals.  This gas is rated as being of a similar toxicity to cyanide gas.

In other words being near decomposing piles of Seaweed could kill you.

In fact due to the vast influx of seaweed in summer months on the coast of Brittany there has been a recorded death from this very same factor in the last few years – numerous wild and domestic animals have also died. 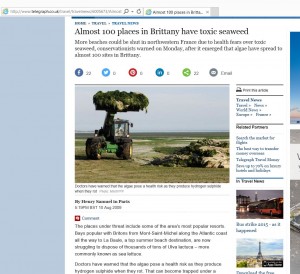 This is from the Telegraph Newspaper

To be able to handle large amounts of harvested seaweed Formalin has been found to be the only usable chemical capable of preventing the production of this gas.  However formalin has problems of its own.

The eec has become so concerned about this chemical that it has produced strict controls of its use – its use in animal feeds for instance will be banned from june 2015. 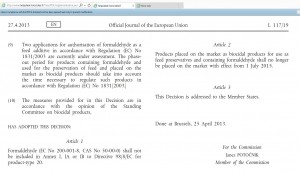 The main concern is its particular connection with various types of cancer, in particular leukemia. 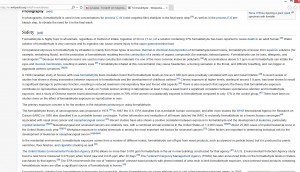 Essentailly it says that before 2000 Fmc released into the sea over 700 tons of formalin per year – fortunately they now have it under control and the release is down to about 100 tons per year. 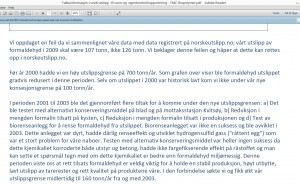 Apparently this is the only industry that is allowed to do this.

The building at Smørholm used to store the seaweed looks poor repair – from the outside it looks as if the walls are composed of timbers slotted into place – if there is any proper jointing or plastic lining it is impossible to ascertain from the outside.

One question which has disturbed us considerably is how is the formalin dealt with after use?

Is it washed out and re used?  What happens to the waste that must be contaminated with formalin?

How much formalin does the finished alginate contain?  Are there any measures for this – has anybody measured this?

We know there are serious health issues associated with carrageenan http://fodmaplife.com/tag/health-issues-with-carrageenan/