The Tare tråwlers have been active outside Hustadvika since last october – we have filmed them in apparently the same places over and over – the idea is clearly to remove all – that is every plant – from the seabed.  This cannot be under any circumstances regarded as anything but environmental vandalism. 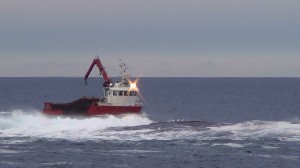 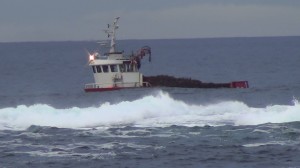 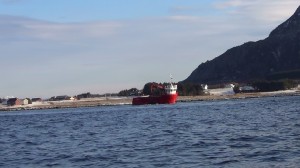 We have papers that reveal ephphytes take at least 6 to 9 years to grow back – the forests are harvested every 4 to 5 years or less – so that means there is very little natural life in the seawed forests – filming the rocks in the area reveals very few barnacles – the rocks should be covered – filming the seaweed stalks that have fallen overboard from the trawlers or simply been left reveals the stalks nearly empty of any kind of epiphyte – we saw nothing living on the seaweed stalks we examined – there was a great amount washed up. 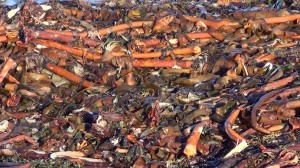 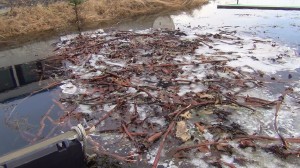 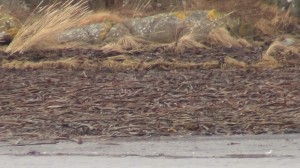 We have papers that say that if the amount of epiphytes on the stalks is diminished then taretråling must stop – it is clear they are – it is clear that the cod fish in the area are sick – time for a closer examination of  the effects this continuous destruction of the seaweed forests is having !!!

It is evident that taretråling is not being thoroughly examined internationally – the removal worldwide of this plant and others like it must be having an effect – biologists and marine biologists seem to be unable to act – is it really up to little groups like stopptt to do something about it – riight next stop polititians to see if they can and are willing. 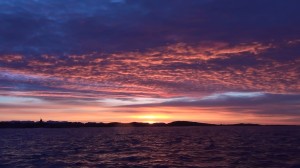 So we know that seaweed cleans the sea, it oxygenates the waters and removes co2.  We have papers revealing how much nitrogen and phosphate it removes from the water – other papers detail the removal of toxins and substances such as tnt.

Recent fishing expeditions out of Hustad,where there has been very heavy taretråling this year and last, and even a succesful prosecution – the first in Norway for harvesting illegaly – have produced a catch of unusual cod – the trip before the same – going back for many months.  The livers of these cod are black, green or in some cases nearly non existant 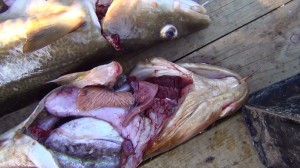 liver from a cod caught at hustadvika 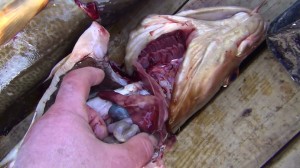 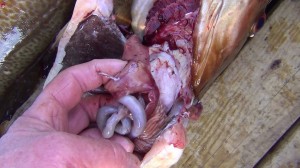 Local people have told us that the council dumps sewage from septic tanks into the sea at Hustad, that the outflow from the village is also by Farstadstrand – just where the taretrålers have been.

So we live in a valley, some 7 kilometres long by 4 kilometres wide – we have many farms, most of them use roundup and other chemicals – we know these have an effect on nature and some like Roundup are proven carcinogens  http://www.greenmedinfo.com/blog/alert-gmo-corn-and-roundup-caused-cancer-and-killed-rats   these are washed from the land into our rivers and streams – some like the hustadriver were famed for salmon – further on roundup —-

http://www.youtube.com/watch?v=KKt8H0ukDo8        in the sea it would normally go through a natural filtration system – which removes so many chemicals, but the state has seen fit to sell this to an american company.

The big question is – do we trust the state enough to watch out for us over this?

We have contacted the mattilsynet  – sent them pictures – we are allready in contact with the fiskerie direktoratet.

The Mattilsynet says it is normal for cod to be like this and the fish are safe to eat – wonder why then the seagulls refused their normal meal? 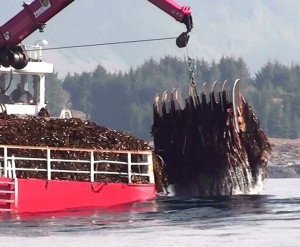 We live on the west coast of Norway.

It is a wild and picturescue place surrounded by mountains and sea – and full of wildlife. Having observed large trawlers greedily grubbing on the seabed near to land with huge steel dredges I felt outraged and puzzled – why was this allowed – why was Norway who prided itself so much on its nature allowing this OUTRAGE.  Didnt people know about the delicate ANIMALS that lived there, didnt they know about the BIRDS that lived off the animals there – the FISH that only bred there – the FISH that lived ONLY there, DIDNT THEY CARE!!!

I met Johan a local farmer, fisherman who felt the same – we studied the boats and got the maps – soon enough we found out where and when they were allowed (what a contentious issue).  Then i began the internet research —

What i found was truly alarming – but this site is not intended to be a conspiracy theory site – the home of spurious documents produced by fertile imaginations with no scientific fact or background. This is meant for serious researchers and for those who have an interest but have no clue where to look or are unaware of what is happening. One company has the right to harvest on the Norwegian coastline using trawler dredges.  FMC biopolymers. This company is one of a group of 9 companies in the FMC CORPORATION www.encyclopedia.com/topic/FMC_Corp.aspx. Further research reveals that one of these companies produces an insecticide so poisonous that it is used in Tanzania to KILL LIONS.  The American food and drug administration has banned Furadan and yet this is what the company says www.furadanfacts.com/FAQs.aspx. Another is mining LITHIUM mainly used in the batteries of environmentaly friendly electric cars – this mining is causing PERMANENT ENVIRONMENTAL DAMAGE in one of the worlds most fragile ecosystemswww.meridian-int-res.com/Projects/Lithium_Microscope.pdf. Recently the fmc corp was fined 25 MILLION EUROS for operating a price fixing cartel –www.brickcourt.co.uk/news/29-06-2011—parent-company-liability-test-applied-by-general-court-upholding-25-million-euro-fine-on-fmc-companies-in-hydrogen-peroxide-cartel.asp

Fmc companies are also responsible for a number of contaminated sites worldwide, contaminants include radiation and solvents.  (For more information see BERTRAMS BLOG on this site)

The procedure used to harvest the seaweed on the Norwegian coast requires the removal of the seaweed before it is fully mature (it takes 6 to 9 years before full biological diversity is restored – the weed is harvested every 4 to 5 years) This is mainly because some of the organisms intefere with the production and extraction of alginate.  in other words there is a systematic attempt to reduce the amount of wildlife on the Norwegian coast.  FMC has access to Norways BIRD RESERVES.

Papers also reveal that FMC S activities re seaweed harvesting is worldwide – one country FMC is involved with Peru, banned seaweed harvesting in 2008 but it still continues – Peru had a big dieback of marine mammals and birds in january 2012 – mainly due to starvation – possibly linked to the marine current el  ninjo but these animals also feed in the seaweed forests.http://www.csmonitor.com/Science/2012/0509/What-s-causing-mass-pelican-and-dolphin-deaths-in-Peru

In fact the bird mentioned in this article display symptoms mentioned in this paper  http://www.balticsea2020.org/english/alla-projekt/oevergoedning/eutrophication-ongoing-projects/57-thiamine-deficiency-in-mussels-and-eider-in-the-baltic-sea-cause-studies

www.youtube.com/watch   THIS IS OUR FIRST VIDEO ON SEAWEED TRAWLING.

www.youtube.com/watch  JOHANS VIDEO – Expressing his anger and how he feels on the subject.

www.youtube.com/watch  THIS IS THE SECOND VIDEO –